Just in time for the start of the 2020 international exhibition season, Holmer is presenting a new, drone supported TopView system for its sugar beet harvesters. The new system extends the TopView all-round view of the Terra Dos T4.

In the previous system, the operator had up to six colour cameras in the area of the sieve belt, rear of the machine and unloading conveyor, as well as a top view of the machine. The system enabled a maximum 270° all-round view around the sugar beet harvester.

The permanently installed cameras at the sieve belt, rear of the machine and unloading conveyor are supplemented by a live stream from a bird's eye view of the machine, which is recorded by a high-resolution camera mounted on a drone and transmitted to the monitors in the cabin via ac-WiFi.

The Terra Dos T4 is equipped with a specially programmed drone for this purpose. This has a permanently installed docking and charging station on the cab roof of the sugar beet harvester. During road travel, the drone is recessed in the cab roof.

The drone only rises on the field after activation by the driver and remains in the immediate vicinity of the vehicle. It flies in a fixed programmed circle around the machine and thus permanently delivers images of the exterior view of the beet harvester into the cab. The driver thus gains in safety, as there are no more blind spots on the machine. The driver can also send the drone to any point on the machine, for example to obtain a better view at the desired location during turning manoeuvres.

The drone automatically detects obstacles such as power lines or trees using 3D hall sensors or ultrasonic sensors and avoids them or returns to its docking station on the cab roof.

Thanks to powerful motors and high-end flight controllers, the Octocopter can fly safely at wind speeds of up to 60 km/h. For this purpose, the drone is equipped with a 15,000 mAh battery, which allows flight times of up to 40 minutes at a time.

HOLMER tested the TopView drone system during the last sugar beet harvest in 2019: The image transmission into the cabin is stable, the drivers love the high level of safety thanks to the flexible all-round view and the drone's operational safety is convincing even in windy conditions.

The drone supported TopView system is compatible with HOLMER's Terra Dos T4-30 and Terra Dos T4-40 sugar beet harvesters. It is available immediately and can be ordered as an option for machines in production 2020. The system is downward compatible, so that older Terra Dos T4 series can also be retrofitted with it. 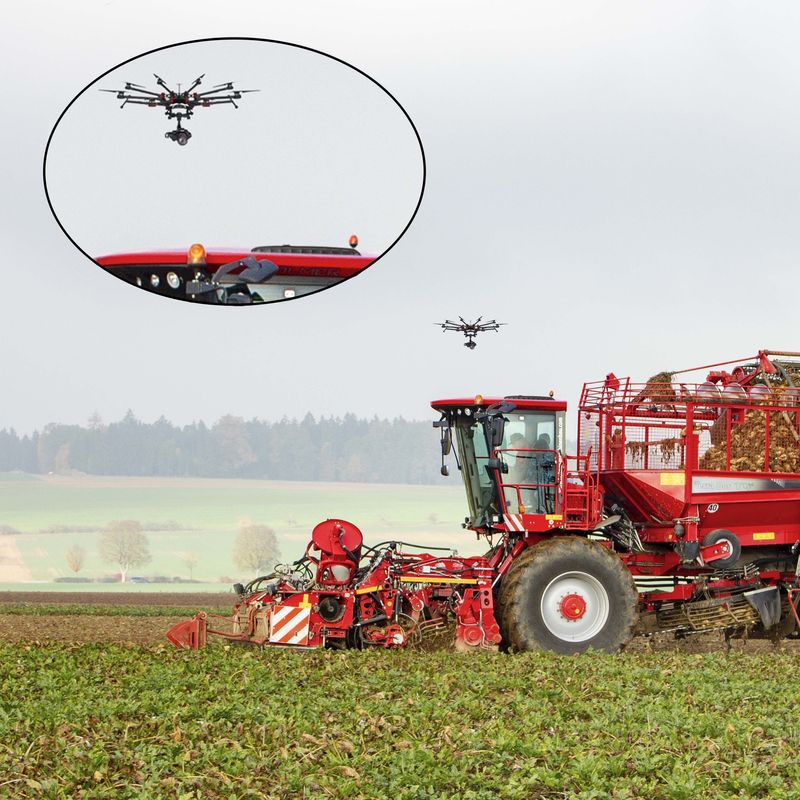